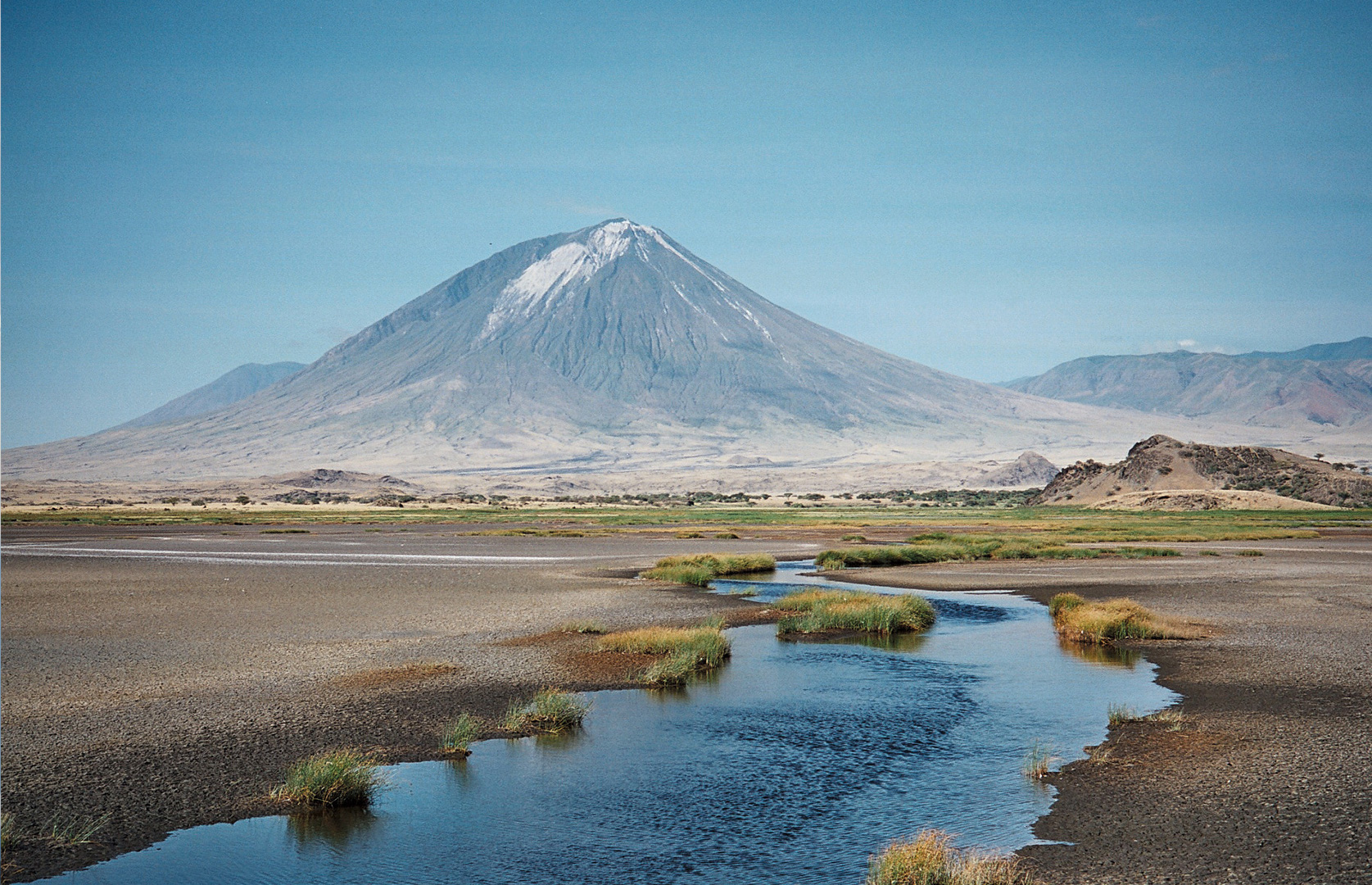 “Oldoinyo Lengai” means “The Mountain of God” in the Maasai language. The summit of this strato-volcano is 2962 metres above sea level, and affords direct views into the caldera of Tanzania’s only officially-certified active volcano, and the world’s only carbonatite volcano; records of eruptions have been maintained since 1883, the largest of which deposited ash 100 kilometres away in Loliondo on the Kenyan border to the north west.

It is located in northern Tanzania lying just south of Lake Natron in the Rift Valley, in the heart of Maasai country, and locally regarded as a sacred mountain. Looking north from it’s summit crater, the hot barren salt flats of Lake Natron stretch into the distance. To the south stretch the crater Highlands and the Ngorongoro Game Reserve. The eastern horizons dominated by Kilimanjaro and to the west the forested escarpments and hills comprising the western slopes of the Rift Valley. Every seven years Lengai erupts and plumes of smoke billow out of the crater.

It is possible to walk across the crater floor. The ascent of Oldoinyo Lengai is demanding on account of the day time heat, lack of water, steep and unsuitable slopes of ash and crumbly rocks and considerable height gain. Normally you can start ascending to summit early in the morning and reach to summit at sunrise. Short and a warm jacket are suitable for ascent, also long trousers are good as the summit before dawn can be cold. Access route from the North West allows an early descent to be made from the summit in the morning shadow.

Standing at 2,878 meters above the Soda Ash Lake Natron, Mountain of GOD as famous to the Maasai community that inhabit the area, Mountain Ol’doinyo Lengai is situated in the Ngorongoro highlands and the African Rift valley about 120 kilometers Northwest of Arusha, Tanzania.

Since the past ancestors the Holly Lengai has been used by Maasai for their prayer to their GOD known as NGAI. Ol’doinyo Lengai is the only active volcano in the world that erupt natrocarbonatite lava which is cooler than other lavas about (510 degrees C) compare to the temperatures of basaltic lavas (1,100 degrees C) with less silicon.

The Mountain frequently does minor eruptions and form cone like structures to its crater base.

While on the summit of Mountain Ol’doinyo Lengai one can sight clearly the Soda Lake Natron which accommodates and consist of good nesting sites for different bird species especially the Flamingos, pelicans and geese more than 350 different types are recorded to date.

Unlike others two highest Mountains, Lengai takes about six to seven hours to the summit crater. Also the Mountain is an ideal place for a working safari escort by the Maasai guides with weapons tourist can sight wild animals like olive baboon, velvet, monitor lizard, hyenas, lion, leopard, jackal, Grant’s gazelle, impala and zebra.

The nearby are the Maasai BOMAS that gives you a chance to interact with the indigenous learn their cultures, taboos and traditional.