Tanzania is Africa’s premier hunting safari destination for international tourists. It has one of the largest population of big game in Africa and a greater variety of wildlife than most other countries in the world. Hunting is part of Tanzania’s wildlife conservation strategy and a requirement for its long-term survival.

Tanzania is traditionally renowned for its exceptional hunting and excellent trophy quality.

For decades until today, hunting safaris are being organized in protected areas such as game reserves and game controlled areas by licensed hunting companies. Tanzania Wildlife management Authority (TAWA) is regulating and controlling all activities related to hunting.

Local communities receive 25% of the revenue accrued as a game fees, TAWAA also manage the forma Selous Game Reserve, the largest Wildlife reserve in the world and also a World Heritage Site.

Apart from trophy hunting experience, Tanzania offers a unique opportunity to visit the most outstanding spectacular attractions in the word. The world famous Serengeti National Park, Mount Kilimanjaro ( the highest free standing mount in the Africa), Ngorongoro Crater include the remains of the earliest  humans at Olduvai Gorge, the beautiful islands of Zanzibar with the historic of Stone Town, which is also a  World Heritage Site.

Regulations are connected with TAWA’s conservation strategy. They are set up by the Ministry Of Natural Resources And Tourism and they define e.g. types of weapons and ammunition to be used, prerequisites for application of a hunting permit and the quota for different kinds of animals updated regularly.

Tanzania is the place to see spectacular and seemingly endless herds of wildebeest, buffalo and zebra as well as elephants followed by predatory lions, leopards and hyaenas. Its bird life is unique with over 1,000 species; its lakes and rivers abound with fish; and its islands offer some of the best game fishing sites in the world.

It is TAWA’s task to determine the species to hunt according to a census assessment. So TAWA is responsible for assigning quotas for each species yearly in collaboration with a specified committee, scientific researchers and the University of Morogoro.

Clients shall only be permitted to hunt those animals for which their permit is issued (subject to quota availability). By Tanzania Law only hunting clients are permitted to hunt. Any observers who wish to hunt will result in upgrading the observer to hunting client status, which will mean adjustment of all fees, including basic safari fees and all Government fees.

1 x 1 One lion and one leopard permit.

2 x 1 The clients must share one lion and one leopard permit.

2 x 2 Each client will have one lion and one leopard permit.

3 x 2 The clients will share two lion and two leopard permits. The minimum legal length for Leopard is 1.30 meters (51.2 inches) from tip of nose to base of tail.

More than a quarter (264,600 km²) of Tanzania’s land (945,000 km²) is set aside for wildlife conservation but none of these wilderness areas are fenced and the game is free to move wherever conditions are most attractive. What is more, most of the areas that form the primary hunting concessions are so remote and pristine such that access is only feasible by private air charter.

So once on safari, you may truly fee l that the land is just there for you to enjoy your adventures.

A list of all protected areas open for hunting including a short description can be found under Conservation Protected areas. 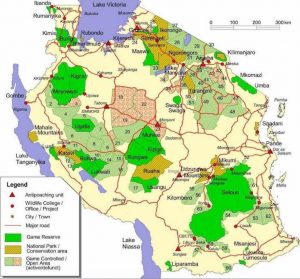 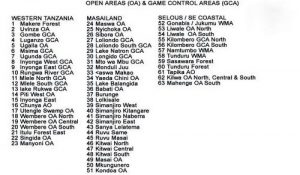